a line a thread a conversation

a line
a thread
a conversation

Opening by Prof. David Paton, followed by an artist walk and talk with Odette Graskie hosted by Els van Mourik on Saturday the 21 January 2023 at 11:00 for 11:30am

Odette Graskie invites you to join us for the opening and to take part in the interactive performance where she will do an altered variation of her “Drawing Sessions”.

The exhibition examines lines, threads and connections that have been formed during the Drawing Sessions over the last two years. These portraits gain movement and are ever evolving, inhabiting the space, and interacting with viewers.

*This is an exhibition in partial fulfilment of the degree of Master of Arts in Visual Art, University of Johannesburg. 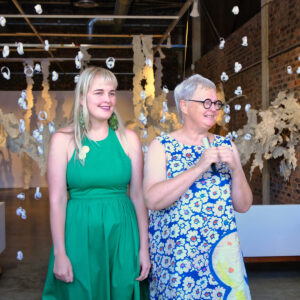 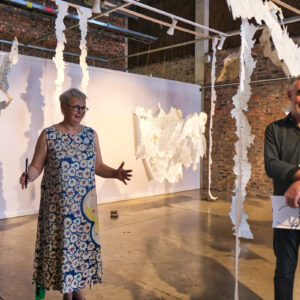 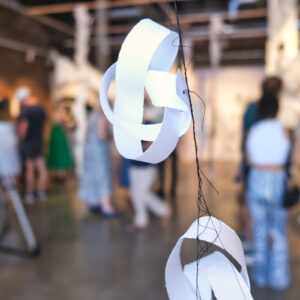 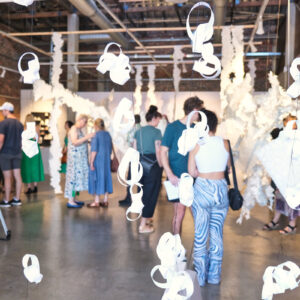 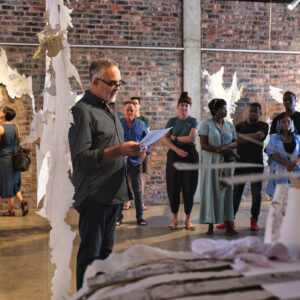 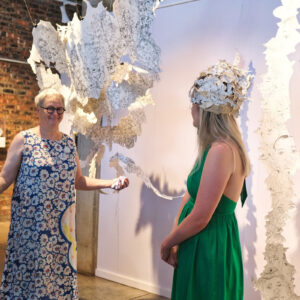 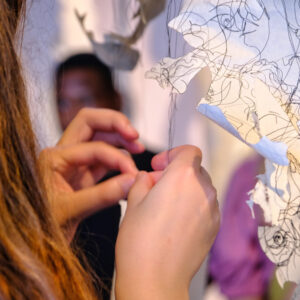 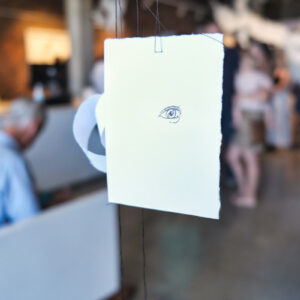 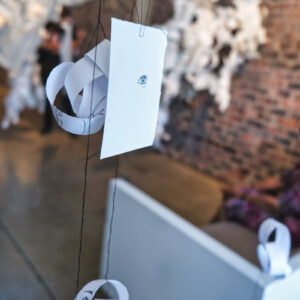 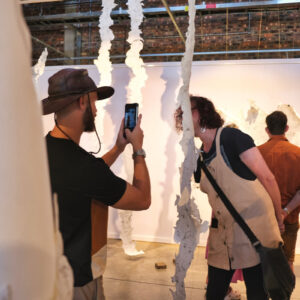 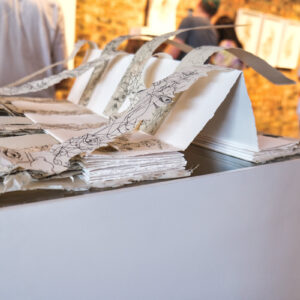 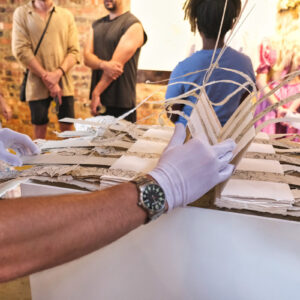 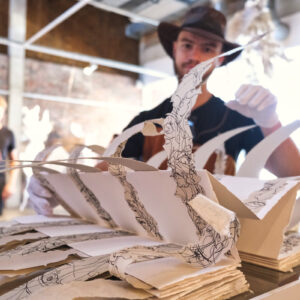 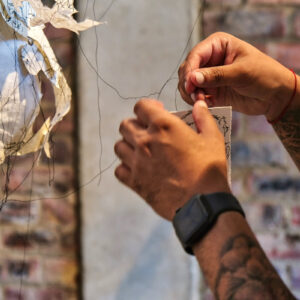 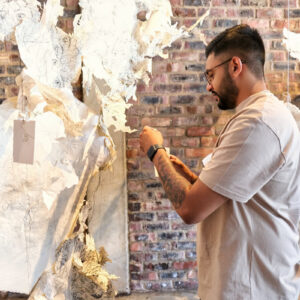 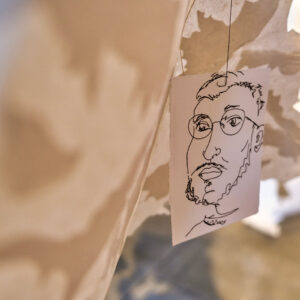 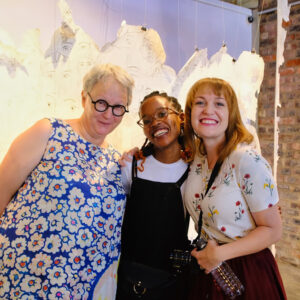 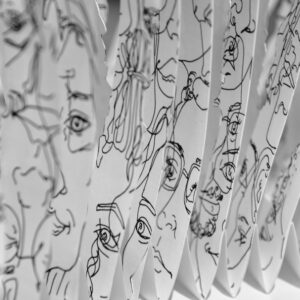 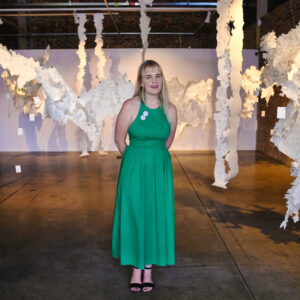 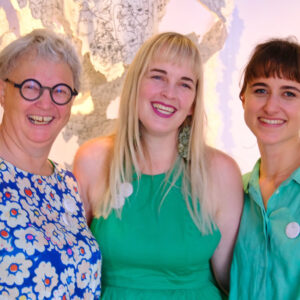 “In my search for a pliable, abundant medium that can be woven, the hyacinth presents unique opportunities both from an ecological and a material perspective. The hyacinth is an aggressively invasive aquatic plant originally from the Amazon which was introduced as an exotic pond plant in South Africa in the early 1900s. It can now be found blocking almost every Cape Town waterway, deoxygenating the water and devastating local fauna and flora.
I am interested in the somewhat grotesque bulging, pulling, squishing, knotting, and rubbery nature of the hyacinth. In its dried, woven, and sculptural state, it retains its presence as a matting alien organism that spreads and constricts. As the hyacinth in the river grows endlessly, so the hanging and twisting dried hyacinth sculptures expand and hold the space in an installation reminiscent of a hyacinth forest.

My dad and I built a loom in the first two weeks of lockdown in 2020. Continuing to be in lockdown on and off for over a year now has resulted in a rhythm of loom work. Operating a loom that is bigger than me feels like expanding my body further into space, taking up all the space that I have in my studio rather than being contained and isolated.

I have focused on harvesting hyacinths in the Black River and Princess Vlei, being outdoors growing flax on my pavement, and bringing these materials from the outside world into my studio. In some sense, my loom and my body thus lengthen out to these locations. Rather than feeling stuck in my home or studio, I feel like I have spent this time connecting several sites around Cape Town through my focus on materials. This “extending” and “collecting” has grounded me, brought me sanity, and given me purpose over the last year.”

“I am interested in the patterns of interaction and behaviour that permeate humanity. The last 400 years of recent Southern African history with European ships first rounding the Cape of Good Hope initiated a heightened, accelerated time of cross continental reach, colonisation and transformation (much of it profoundly exploitative). The global migration of people in the modern era, often through slavery, irrevocably altered the world and the people inhabiting it. Along with the boons of technology and cross cultural exchange powerful systems of hegemonic domination and economic suppression persist today. And they persist in ways that embody us now, even if we tend to be desensitised. Unfolding beauty and cruelty permeates us. We are fragmented by it, even as we seek wholeness.

My work attempts to capture these fragments. I am asking how we are implicated in a historical unfolding, and how we might be transforming it. I work with images that have a deep guttural resonance. Images that move me out of my head into my feeling centre. From this space, the pieces evolve… tracking an energetic process of embodied becoming through difficult inner landscapes.

“My artistic practice revolves around mystery, connection and moments of intimacy. It includes media such as drawing and an exploration of paper. By making my own, or discovering other handmade paper sheets, there is an embrace of the materiality of the page. My experiments with paper are attempts at maintaining the essence of the pages the different textures along with the weightless fragility while pushing the ways in which paper can be developed, entwined with my own hand and expression. Paper is a mode of connection, a way to tell stories through lifespans. In my artworks every face belongs to another, they are always connecting. I believe that human connection is healing and important when overcoming trauma.

My process comprises obsessive, labour intensive drawing, cutting and putting pieces back together again. Drawing is a way of seeing, a way to connect with the world around me on a deeper level. Since a recent visit to Picasso and Paper at the Royal Academy in London, I have felt a renewed sense of the importance of drawing. By really looking at someone, even if I never see them again, I embrace the possibility of other existences outside of my own and find a way to connect with people.”

“While still heavily influenced by Zulu history and African storytelling as a whole, I stumbled upon these rondavels respectfully known as uguqa sithandaze which translates to “kneel and pray”. This basically means that one has to kneel in order to enter this sacred space. Could also be used a symbol of humility. It had and in some parts of KwaZulu Natal still has a variety of uses, from a spiritual consultation room known as indumba to a sacred space where families come together to pray.

These specific ones in my work belong to the regional king of the Khumalo clan and historically, his reign is a direct link from Mzilikazi kaMashobane, a Southern African king who founded the Mthwakazi Kingdom now known as Matebeleland, in what became British South Africa Company-ruled Rhodesia and is now Zimbabwe.

This space teleports me to a time long before my existence. Despite being renovated, I enjoy how they have kept the original shape and use of materials.”

“I mostly work with clay, which I dig up from a river close by to my studio during the rainy seasons – this allows for the clay to soften and become finer as the water purifies the clay. Through the experimentation of clay, I have learned how to use this organic medium, by learning what clays should be mixed and what works well together. There is a fluidity in my process as well as very technical and scientific approach when it comes to glazing and firing the ceramics, the outcome is never known and that excites me. This process has helped me develop a natural language and relationship with the medium, which has now become instinctual and ritualistic in my everyday experiences.

My sculptures are fused with poetry, which demonstrates my personal experiences – they portray the more intimate and honest parts of myself. The poems are there to ignite a connection with the audience and at the same time to spike a conversation. Being honest in my poetry helps me to define my artworks and their forms. To a degree, I am handing over my true self through these artworks.

The sculpture titled; It’s days like these when I remember the sugar cones and melted ice creams, was based on the urge to see if I could still make a vessel, I remembered my student days making vessels, not my favorite thing to do back then but these days I seem to enjoy doing the things I did not like before.”

“The artworks displayed are photographs inspired by motion, juxtaposed with my own feeling of stagnation. Reaching a liminal phase in my life, moving from adolescence to adulthood, the internal feeling of moving on became more and more apparent. Not being able to move on due to a number of responsibilities still left for me, the hope of journeying on became frustration because of my inability to do so, leaving me at a place of stagnation. Having the feeling of moving around in the same position led me to question my own identity. The clear image I had of myself was blurred by self-doubt and uncertainty.

As a gift, I was given a flower which I watched bloom and then later decay. Using this as an opportunity to create work, I applied the same feeling of motion and stagnation to the roots of the plant and later applying the same method to other discarded objects I found on the ground. By overlaying the images on top of one another, the blurred effect obscured the objects in a way that disassociated them from what they originally were. The method of moving a stationary object led me to see myself in a way I wasn’t aware of before. A nebulous version of myself.”

“It is therapy as it is pain and joy from the human groans to the echoes where the song becomes that kind of blue and other tones; visual poetry on the inner self that is at times unknown to me as a painter. The constant visions of masks and masquerades whose turmoil in my head are a reflection of the outside world and my inner world. Essentially my quest as an artist is to enhance my aesthetic in the context of my identity by way of creating personal poetic journeys and an uncharted third world space in the universe. The outside world is there as a raw material object for me to tune into, to chime with my innate world and vice–versa, at times the darkness of being is just that and it would be just as easy to paint black canvases so as to reflect the state I’m in and yet the metaphysical nature of art creation turns to yield an enlightening experience.”

Whenever Mthiyane paints he plays a lot of jazz in the background and that also fuels his thought process. His works are more about personal expression and the channeling of innate creative forces than they are stylistically reflexive engagements with the discourse of art history. “The works are only premeditated up to maybe the first gesture. After that to complete them, it’s something completely different”, he says.

Blom’s private pictographic language is hermetically sealed; known only to him. It is a language forged from the frustration of being dyslexic, created to enable him to express and record significant life events. Blom is tight-fisted about his private language, keeping it concealed in a hideaway between the bedroom cupboard and roof of his childhood home. He explains that he “cut a little lid in such a way that when you opened it you could not see it”. There he could be without any disturbances, free to express himself to himself alone. In the series “A Life Story”, Blom puts his life on display in a way that is visible to the public but decipherable to himself alone.

“My work focusses on the intersections of people’s lives; where we have an opportunity to grow. It also interweaves the following sub-themes: Engineering, Art, Femininity and Spirit. The works illustrate the different aspects of the journey as well as how all beings are connected and as balanced, humane individuals, we can all contribute positively as we interact with each other in our communities. The media used as well as the items used for manipulation of the artworks has its own meaning relating to the theme. However, used together they represent balanced individuals on their journey.”

“I work in multiple mediums, including experimental printmaking, sculpting, painting and installation. My work often explores different ways in which energies, moments, memories and histories can be captured, documented and preserved. The work is very experimental in nature and often takes a performative approach to the process of making. In this, there are initial intentions, but there is an overlapping of uncontrolled processes. These processes ricochet off one another within my different mediums where a shared language emerges from the collective of my work”.