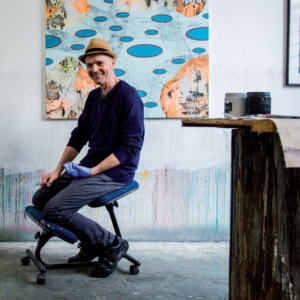 Born in Zimbabwe in 1961, Robertson spent the early part of his journey as a visual artist in the film industry, freelancing as an art director. Between film projects, he pursued his passion for photography, which was primarily a form of social commentary, often concerned with documenting marginalised lifestyles.

After winning a national prize at the Spier Contemporary competition in 2010, for Paper Trails – a documentary project focusing on informal recyclers in Newtown, Johannesburg – he took a break from both photography and the film industry and began the journey of learning to paint, guided only by his own aesthetic intuition.