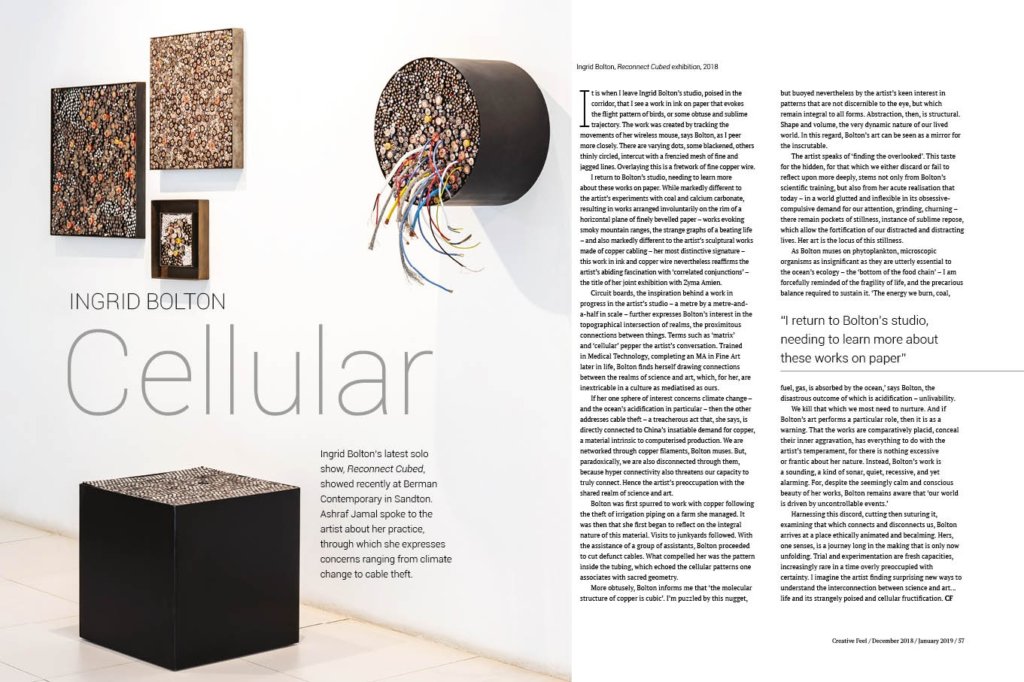 Ingrid Bolton’s latest solo show, Reconnect Cubed, showed recently at Berman Contemporary in Sandton. Ashraf Jamal spoke to the artist about her practice, through which she expresses concerns ranging from climate change to cable theft.

It is when I leave Ingrid Bolton’s studio, poised in the corridor, that I see a work in ink on paper that evokes the flight pattern of birds, or some obtuse and sublime trajectory. The work was created by tracking the movements of her wireless mouse, says Bolton, as I peer more closely. There are varying dots, some blackened, others thinly circled, intercut with a frenzied mesh of fine and jagged lines. Overlaying this is a fretwork of fine copper wire.
I return to Bolton’s studio, needing to learn more about these works on paper. While markedly different to the artist’s experiments with coal and calcium carbonate, resulting in works arranged involuntarily on the rim of a horizontal plane of finely bevelled paper – works evoking smoky mountain ranges, the strange graphs of a beating life – and also markedly different to the artist’s sculptural works made of copper cabling – her most distinctive signature – this work in ink and copper wire nevertheless reaffirms the artist’s abiding fascination with ‘correlated conjunctions’ – the title of her joint exhibition with Zyma Amien. 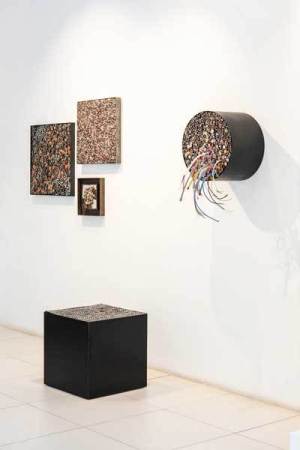 Circuit boards, the inspiration behind a work in progress in the artist’s studio – a metre by a metre-and-a-half in scale – further expresses Bolton’s interest in the topographical intersection of realms, the proximitous connections between things. Terms such as ‘matrix’ and ‘cellular’ pepper the artist’s conversation. Trained in Medical Technology, completing an MA in Fine Art later in life, Bolton finds herself drawing connections between the realms of science and art, which, for her, are inextricable in a culture as mediatised as ours.
If her one sphere of interest concerns climate change – and the ocean’s acidification in particular – then the other addresses cable theft – a treacherous act that, she says, is directly connected to China’s insatiable demand for copper, a material intrinsic to computerised production. We are networked through copper filaments, Bolton muses. But, paradoxically, we are also disconnected through them, because hyper connectivity also threatens our capacity to truly connect. Hence the artist’s preoccupation with the shared realm of science and art.
Bolton was first spurred to work with copper following the theft of irrigation piping on a farm she managed. It was then that she first began to reflect on the integral nature of this material. Visits to junkyards followed. With the assistance of a group of assistants, Bolton proceeded to cut defunct cables. What compelled her was the pattern inside the tubing, which echoed the cellular patterns one associates with sacred geometry.