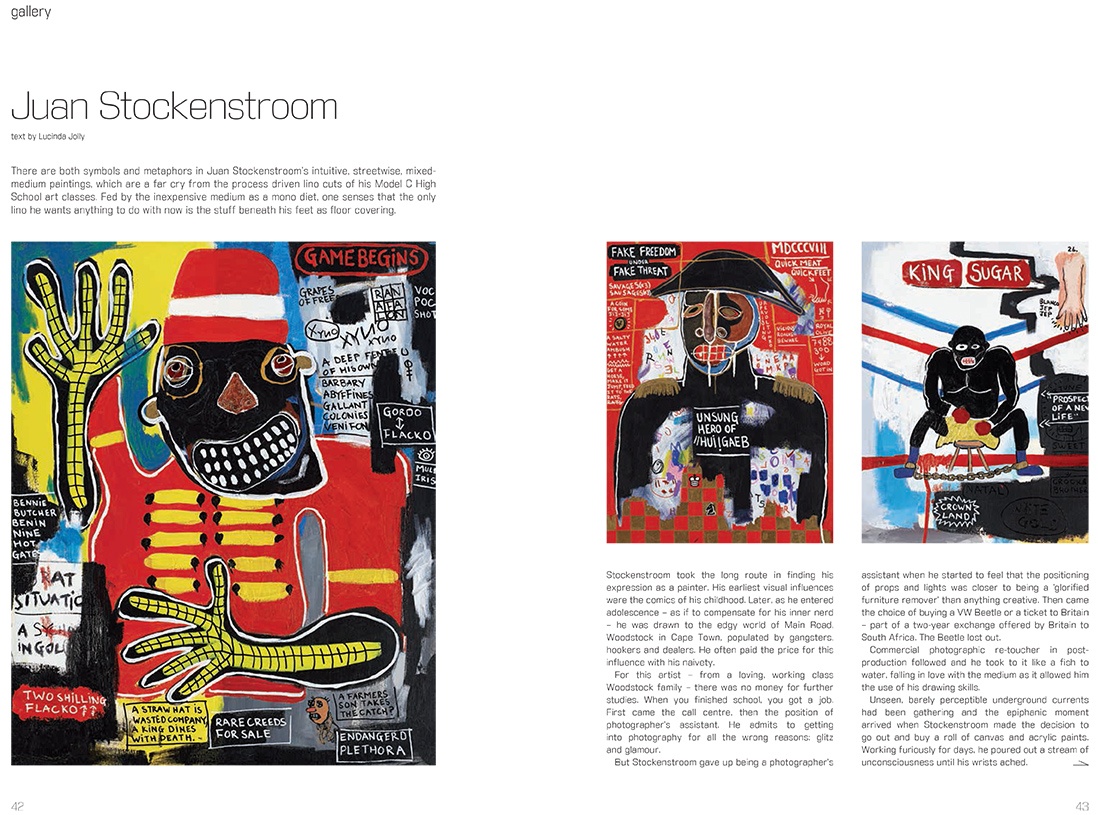 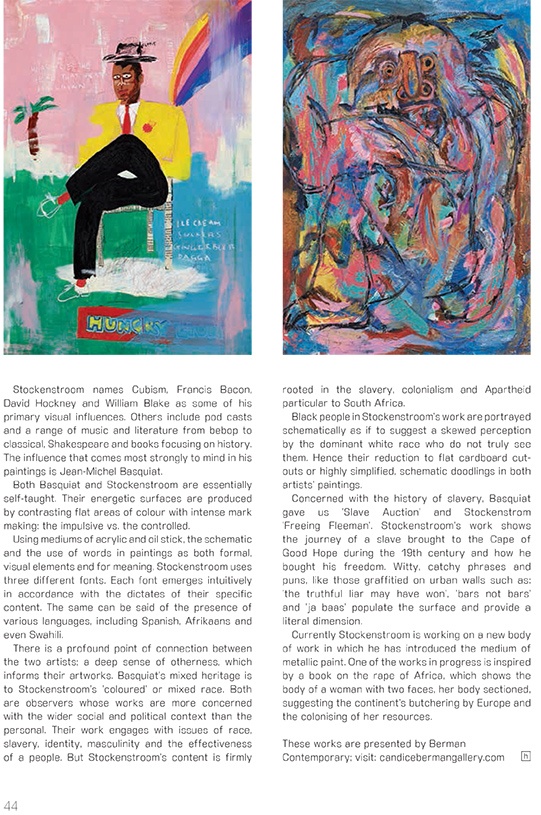 There are both symbols and metaphors in Juan Stockenstroom’s  intuitive, streetwise, mixed- medium paintings, which are a far cry from the process driven lino cuts of his Model  C High School art classes. Fed by the inexpensive medium as a mono diet, one senses that the only lino he wants anything to do with now is the stuff beneath his feet as floor covering. 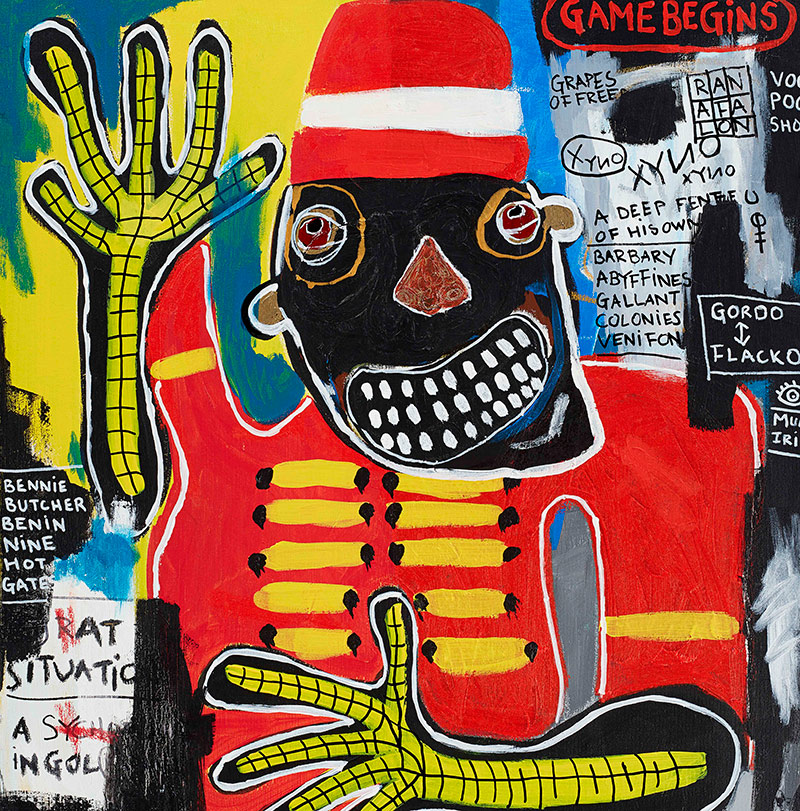 Stockenstroom took the long route in finding his expression as a painter. His earliest visual influences were the comics of his childhood. Later, as he entered adolescence – as if to compensate for  his inner nerd – he was drawn to the edgy world of Main Road, Woodstock in Cape Town, populated by gangsters, hookers and dealers. He often  paid the price for  this influence with his naivety.

For this artist  – from  a loving, working class Woodstock family – there was no money for further studies.  When  you  finished  school,  you  got  a  job. First came the call centre, then the position of photographer’s  assistant.  He   admits to  getting into photography for all the wrong reasons:  glitz and glamour.

But Stockenstroom  gave up being a photographer’s assistant when he started  to feel that the positioning of props and lights was closer to being a ‘glorified furniture  remover’ than anything creative. Then came the choice of buying a VW Beetle or a ticket to Britain – part  of  a two-year  exchange offered  by Britain  to South Africa. The Beetle lost out.

Commercial photographic re-toucher  in post- production  followed  and  he  took  to  it  like a  fish  to water, falling in love with the medium as it allowed him the use of his drawing skills.
Unseen, barely  perceptible  underground  currents had  been  gathering  and  the  epiphanic moment arrived  when  Stockenstroom   made  the  decision  to go out and buy a roll of canvas and acrylic paints. Working furiously for days, he poured out a stream of unconsciousness until his wrists ached. 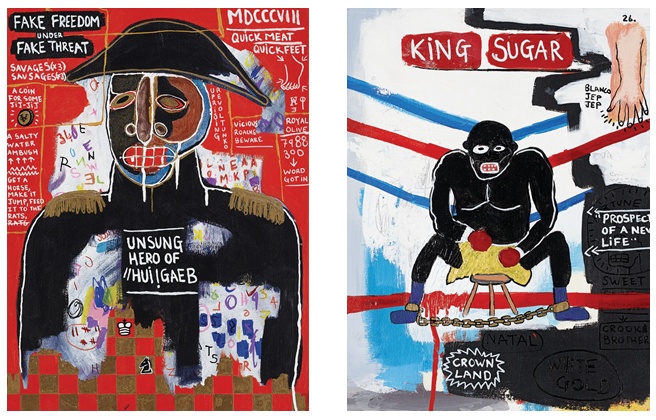 Stockenstroom names Cubism, Francis Bacon, David Hockney and William Blake as some of his primary visual influences. Others include pod casts and a range of music and literature from bebop to classical, Shakespeare and books focusing on history. The influence that comes most strongly to mind in his paintings is Jean-Michel Basquiat.

Both Basquiat and Stockenstroom are essentially self-taught. Their energetic surfaces are produced by contrasting flat areas of colour with intense mark making: the impulsive vs. the controlled.

Using mediums of acrylic and oil stick, the schematic and the use of words in paintings as both formal, visual elements and for meaning, Stockenstroom uses three different fonts. Each font emerges intuitively in accordance with the dictates of their specific content. The same can be said of the presence of various languages, including Spanish, Afrikaans and even Swahili.

There is a profound point of connection between the two artists; a deep sense of otherness, which informs their artworks. Basquiat’s mixed heritage is to Stockenstroom’s ‘coloured’ or mixed race. Both are observers whose works are more concerned with the wider social and political context than the personal. Their work engages with issues of race, slavery, identity, masculinity and the effectiveness of a people. But Stockenstroom’s content is firmly rooted in the slavery, colonialism and Apartheid particular to South Africa.

Black people in Stockenstroom’s work are portrayed schematically as if to suggest a skewed perception by the dominant white race who do not truly see them. Hence their reduction to flat cardboard cut- outs or highly simplified, schematic doodlings in both artists’ paintings.

Concerned with the history of slavery, Basquiat gave us ‘Slave Auction’ and Stockenstrom ‘Freeing Fleeman’. Stockenstroom’s work shows the journey of a slave brought to the Cape of Good Hope during the 19th century and how he bought his freedom. Witty, catchy phrases and puns, like those graffitied on urban walls such as: ‘the truthful liar may have won’,‘bars not bars’ and ‘ja baas’ populate the surface and provide a literal dimension.

Currently Stockenstroom is working on a new body of work in which he has introduced the medium of metallic paint. One of the works in progress is inspired by a book on the rape of Africa, which shows the body of a woman with two faces, her body sectioned, suggesting the continent’s butchering by Europe and the colonising of her resources.